This page features some of the other concepts and texture work that I’ve completed over the last few years.

Sometimes I got to combine a little graphic design with a little character design.  Need For Speed: World crossed over with Battlefield Heroes (Two Play4Free franchises shaking hands).

So, while I designed a couple of military SUV’s for use in NFS: World, I also designed the characters/outfits which would be added to Battlefield Heroes as part of the cross promotion.

Each faction (The “Royals” and “Nationals”) got their own palette swapped variation on the outfit.  Each item on the outfit could be purchased and installed separately, or as an outfit.  So we did helmets, tops, bottoms, gloves, shoes, and backpacks. 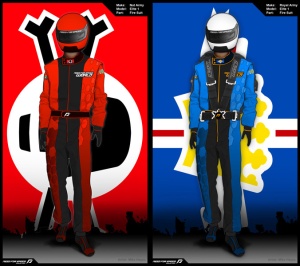 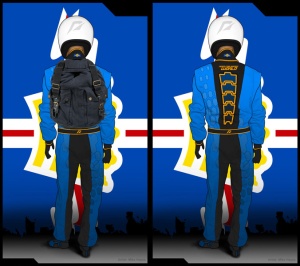 While I was working at United Front Games, after I had completed designing all of the vehicles required for the game, I was set to creating all of the fictional branding, and much of the advertisements seen in the game.

The first one I’ll showcase is for “Gulag” Vodka.  On the right of the image below, you can see the branding logos that I created to be affixed to the bottles.  On the left are the adverts/textures that I created for in-game assets.  Everything is hand painted except for the ice/crushed glass texture (But even that was painted over).  I learned a lot about painting wet, frosted white bottles working on this.  😉

Up next, we needed character mascots for products for children.  “Rhino Rhino” and “Happy Hippo” ended up being used in various places throughout the game.
I was actually quite surprised when the little turquoise rhino ended up being used in the karaoke mini-game.  I’m not sure that the hippos ended up used anywhere in game?

Nothing says an open world in Hong Kong like an American themed country bar.  We needed a logo that really screamed stereotypical American country bar.  Starting with a Stetson hat, and moving onto playing cards, sheriff’s badges and confederate flags.  In the end, the logo that was chosen was the one, dead center of the style guide.

There was to be a particular brand of up market watches in the game, and it was going to be called “Cambria”.  I explored a few different style for this one, but the on in the dead center was the final iteration of the logo.  I’m still partial to the black and red one just to the left.  The overly gaudy gold one was pretty fun as well.  This brand ended up becoming one of my favorite for in-game adverts.

The shopping center needed to have an identity and ad campaign for in-game billboards as well.  At center is the vertical ad that I created.  Just to the left and below, is the actual logo that was selected.

You need to have some gas stations to go with all of those cars.  “Empire Petrol” became that brand.  The final logo ended up canted to the left about 15 degrees, and worked out quite well in the final textured piece.

Other assorted textures from vault.  🙂  The kids film “Ghost Pig” had a couple of posters made.  “Club Bam Bam” was one of the big Karaoke clubs in the game.  The stories behind the brands were very fun on their own.  “Special Meals” fast food chain was a favorite.